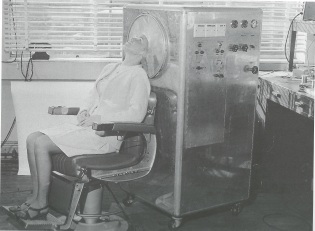 The fifty-year anniversary of missile manufacturing in Belfast might have passed unremarked were it not for this sumptuously illustrated book, written (in haste, he tells us in the Preface) by Belfast Telegraph journalist Eric Waugh. Some people might wonder whether the construction of lethal weaponry, with its capacity to kill and destroy, is really a topic for celebration, but in a sobering argument Waugh reminds us of the inexorable logic of the Cold War. The possession of hi-tech weapons (which were, he admits, fatally dangerous in local conflicts in the post-war period) was the main reason that there was no nuclear holocaust in the ongoing attrition between East and West in the Cold War era. The underlying premise of the book is then, that as well as bringing jobs and technology to the city, the missile manufacturing industry meant that Belfast helped to keep the global peace in the latter part of the twentieth century.

The story starts in earnest with an anecdote. When the German fleet was scuttled at Scapa Flow after the First World War most of the Kaiser’s ships had, as part of their ventilation equipment, fans made in Belfast. Imagine, Belfast-built shipping hardware at the bottom of the sea in the early decades of the twentieth century. Anyway, thus begins the proud tradition of Belfast manufacturers indiscriminately selling military hardware to belligerent nations. Cantering through the first part of the twentieth century we find that in the lead up to the Second World War the British government took control of the nascent Short Brothers enterprise and placed it under effective government control, making the Bristol Bombay aircraft. In a fascinating piece of Belfast history, Waugh notes that in May 1938 the British government organized an Empire Air Day pageant at which crowds watched preposterously outdated biplanes making smoke bombing runs on fake civilian buildings in the new Harbour airport. The author poignantly realises that many of those watching this event would have experienced the real thing in Belfast a few years later.

The Second World War, Waugh asserts, taught the world that an ‘armed peace’ was necessary. So the Cold War began and missiles prospered. Shorts set up their Castlereagh plant to undertake research into missile technology. Here the story hots up, since missilery (the science of making and firing ballistic missiles) needed to bring together various technologies which were still in their infancy. Shorts ‘were soon manufacturing the first general purpose analogue computer to be out into quantity production in the British Isles’. And they were doing this beside the Dale Farm milk factory in Castlereagh. There are some fine photographs of the gadgetry created around this period in Castlereagh. There is a production line of analogue computers, like over-sized pinball machines. Rectangular daleks. A man sits in one which is an early flight simulator. Davros, he looks like. And, of course, extermination was on their collective minds. Shorts developed a beautiful gyroscope for a vertical take-off plane. It looks like it could print off till receipts and keep you hovering at the same time.

As the story moves on various bods come to Northern Ireland to take up the managerial reins. Usually they are of Commonwealth extraction, with an Oxbridge background. You can spot them straightaway in the photos. They stand tall and confident, chin out, utterly absorbed in what they are saying. The Belfast chaps stand with their hands behind their backs looking nowhere in particular. Their suits don’t fit so well. You can smell engine oil off their clothes. But they made impressive rockets. The GPV, constructed just after the war, was 27 feet long and had a five foot wing span. At least you couldn’t sneak one out in your lunch box. Then they started on surface-to-air. This lead to the Seacat, the staple of the industry in Belfast for some time to come.

The Seacat needed a new gyroscope. One of the Shorts engineers went to France. There they had a slick new gyroscope in operation. The engineer realized they were simply using an updated version of a gyroscope first proposed by Hero of Alexander in 100AD. As Waugh notes, sort of, patents don’t last that long, and Conway, Shorts Chief Engineer, decided that, rather than buy it from the French, they’d steal the idea and make their own Hero of Alexander gyroscope. The Seacat, so to speak, took off, adopted by the British and Swedish Navies.

There is one very confusing chapter in this book. This is not a complaint – more a wonderment. The particular chapter builds up to a moment of Whitehall tension around defence contracts. The photographs accompanying this chapter, however, seem to belong to a different book. But it’s good that they are there. They include images of: a reflective parabolic mirror, larger than a person, which can heat a kettle; a log-trimming machine which makes fence posts; a lie detector (including operator and shifty looking female wired up to it); a defibrillator; a laundry sorting machine (also adaptable to post office use); and an automatic scalp massager and hair washer. This last is by far the best of a fine bunch. The woman testing it looks like her head is stuck in a fridge.

The story has a happy ending. Thales defence operations published the book and they are the culmination of the narrative, their weaponry ensuring the liberation of Kosovo. A photograph of Kosovans cheering UN forces (who are armed with the Starstreak missile, proudly made in Belfast) proves this.

And a coda. My copy of With Wings As Eagles came with a torn out, yellowed page from a novel inside the back cover. I can’t trace the book, but it tells the story of the Battle of Beecher Island, in which US forces fought with the Cheyenne and other native American tribes. On the page in question a trapped solider, Jack Stillwell, is confronted with a rattlesnake as he crawls away from the ‘Indians’. He ‘let fly with a cheekful of acid amber tobacco juice’ and the rattlesnake slithered off. All was saved. Maybe this expulsion was the inspiration for another piece of missile technology. Whatever book the page is torn from unfolds a tale of great suffering and bloodshed, on both sides. It is told is stark, heroic terms. It certainly seems to belong inside the back cover of With Wings As Eagles.